Shipping To be determined
Subtotal: 0,00 € 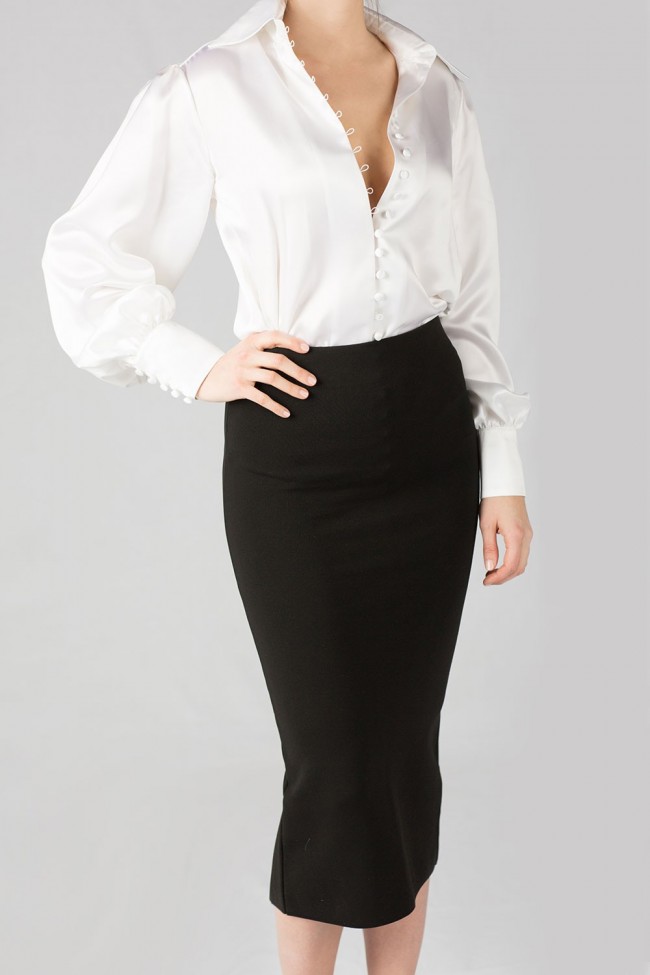 An extremely elegant version, which recalls the timeless and classic white shirt, but having the lightness of silk, with a milk white nuance to give more luster to your style.
The original fastening with tone on tone buttons gives an irresistible and timeless appeal.
Perfect to be worn in the office, just as much as being worn in the evening, combined with black trouser for a classic look and you'll be perfect at any time of the day.

Under a blue satin sky, like the shirt she wore, Amalia hurried to reach the villa’s library, holding a lantern. Her energetic and laborious mind was about to dive again among the pages of those voluminous books, in search of answers. But this time it was different: now she knew where to look.

She had to figure out where the dagger was, and  hoped that her new discoveries could open some glimmers. Since her grandfather, Sir Lawrence, had told her about the Black Thorn, he had never stopped repeating her that she should fear that object because it had a damned fate, and he had paid for it. But now, she was sure, the blame was not the old blade, or of some obscure curse of goddess Kali. Amalia had discovered in books that the knife was not death or destruction: it was a symbol of discernment that dispels the illusions of the world.

If the Black Thorn had led Sir Lawrence to madness, it was not because of some anathema or sorcery, but was due to the sense of guilt that his grandfather had felt from the day Sara had gone forever from his life.

Amalia pulled out from underneath the blouse, a bloated page of Lawrence's diary; she was now ready to spit the tear and to find out the truth.